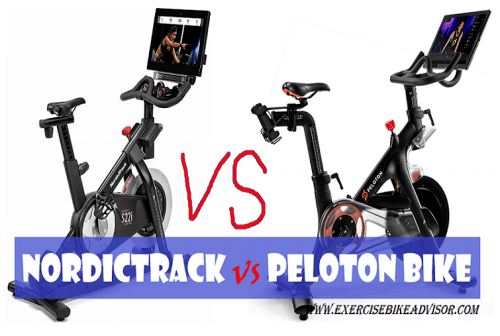 When choosing the best exercise bike, you might get trapped in between NordicTrack vs Peloton bike. It is like “Should I go for NordicTrack bike or Peloton bike?” It may be challenging to decide, but on the other hand, it is totally rewarding when you compare these two bikes since you get a suitable bike for you.

Remember that finding a suitable bike is imperative to the success of your fitness program. That is why we have created this article for you. We will give you in-depth research on NordicTrack Vs Peloton bike and how to choose the best bike.

In this article, we will address their differences, special features, pros and cons and tips on how to choose the best bike? Therefore, with that said, let’s get into the first topic:

NordicTrack is one of the popular among these two bikes, and this is simply because it has been in the market since 1975. The S22i is the modern model of NordicTrack bike with a stylish design and colors and a large HD screen. With tremendous improvements made of over the years, these design can now right smoother as compared to the older models.Also, most people have fallen in love with this design due to well-positioned handler bars, saddle and flywheel and its overall design. So, some of its unique features include:

If it is your first time seeing this bike you might think it is another model of NordicTrack. They have an almost similar design with only a few key differences. But what a better way to achieve your exercise goals other than help from theelite virtual instructors that come with this Peloton bike. What makes this bike more incredible is that is has set the exercise standards to bar high. This is because it offers a wide range of training style along with the elite level instructors. Some of its significant features include:

Both of these bikes may seem similar, but the fact is they have some few key differences. These differences define their performance at different levels of exercises. So let’s have a look at some of the key differences between these two exercise bikes.

Besides the difference between the two bikes, the frame isn’t one of them. These bikes have been designed with a steel frame, thus guaranteeing their durability. And apart from durability, you are also assured of both sturdiness and comfort.

Both these bikes have the same may be different, but the resistance level isn’t that much different. The difference is how it achieves that resistance.Peloton uses a manually controlled system. It uses a Knob-style fluid control system. On the other hand, NordicTrack uses a digitally controlled resistance system. It has a 24-step digitally-controlled magnetic system that enables it to manipulate its resistance.

The NordicTrack bike has a rotating screen. This design allows can easily allow you to have off-the-bike workouts. The Peloton on the other side has a fixed screen design, and this doesn’t give it the flexibility as the one in NordicTrack.

Despite having almost the same size screens, these two bikes have some distinctive features in it as well as similar features too. So, here are some of the console features for both bikes:

Peloton Vs NordicTrack Bike Choosing the Best One for You

When debating about Peloton vs NordicTrack bike, then one of the main agenda is finding the best fitting bike for your workout schedule. And to make this process of identifying the best fit easier, we have highlighted some pros and cons of these bikes.

That said lets now have a look at NordicTrack bike vs Peloton pros and cons.

Both bikes are the same but with a few distinctive features differentiating them. This is why it better to understand everything regarding NordicTrack vs Peloton bike to get the appropriate bike for yourself. And to do this, you will need to know more about their features and differences.Remember, both bikes offer a smooth ride, and for this to happen, they both use a magnetic flywheel. Screens are almost the same size but incorporated with different features in and on it.

The other important thing to note is that both bikes are a good fit for indoor workouts, and more importantly, they require small space. So when it comes to deciding which one to choose, I recommended you start by highlighting the essential features you expect from either of this exercise bike. For me, I would rather start with things like flexibility, price and the app ability. But keep in mind that the effectiveness of the bike should be your primary concern.

So, if you are obsessed with the idea of indoor training and riding, then these exercise bikes are some ideal choices for you.

2 thoughts on “NordicTrack Vs Peloton Bike | Choose The Best Bike?”

“As an Amazon Associate I earn from qualifying purchases”

“As an Amazon Associate, ExerciseBikeAdvisor earn from a qualifying purchases”